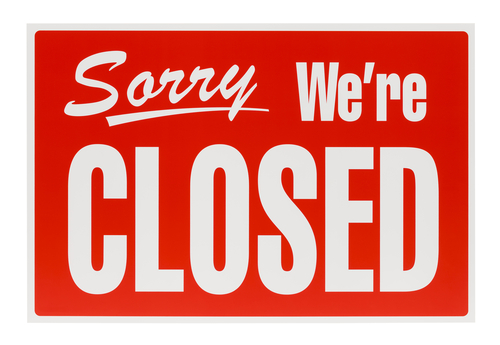 Lawmakers in the United States could not come to a mutual agreement on appropriations and President Trump’s boarder security needs, so consequently the US government has been partially shut down.

Specifically, approximately 400,000 employees are likely brushing up on their gig-economy skills while their offices are closed…or are working without expectations of immediate pay when checks come due. Employees don’t have to worry about not getting paid however, as lawmakers did indeed pass a bill that guarantees payment to employees for work rendered during the current or any future shutdown.

One of those agencies partially shutdown is the Securities and Exchange Commission (SEC); a major market regulator. A number of their duties are considered non-essential and are apparently discontinued until further notice due to the partial shutdown. On the long list of duties “discontinue during [the] lapse in appropriations” includes “processing and approvals of filings and registrations by registrants and regulated entities”.

This covers reviewing registration statements by issuers of securities or IPO documents. While there likely isn’t a specific company that will bail on a US exchange due to the shutdown, the apparent instability of local government could deter future, especially foreign, firms from choosing America as their capital raising home.

Across the Pacific, the major competitor to US listings is Hong Kong. In a recent blog post, HKEX CEO Charles Li suggested HK had a strong 2018 and even stronger 2019 planned. Li and his team are driven to make HK a destination for entrepreneurs…with a “premier international financial centre… and diverse, liquid, well-regulated financial market.”.

According to data from Ernst and Young, the Asia Pac region took down 49% of all deals and 48% of global proceeds for 2018. One the other hand, the Q4 2018 period remained strong for The Americans, with the NYSE and Nasdaq the top 2 exchanges by deal proceeds.