(Bloomberg) — Wu Xiaohui, the head of the Chinese firm buying New York’s Waldorf Astoria Hotel, told Harvard University students of his friendship with Blackstone Group LP chief executive officer Steve Schwarzman, his plans for deals around the globe — and the value of knowing how to say “ni hao.”

Little known before last year’s deal for the landmark property, Anbang Insurance Group Co. has transactions pending in Europe, Asia, Oceania and Africa, Chairman and Chief Executive Wu said in a question-and-answer session at a Jan. 31 Harvard recruitment event, according to a transcript posted on the People’s Daily website in China Wednesday. Staff members hunting for investments have “accumulated enough mileage to travel to the moon twice,” Wu said.

Wu’s latest move is in South Korea, where Anbang signed a memorandum of understanding to buy Vogo Fund’s 57.5 percent stake in Tongyang Life Insurance Co. for 1.1 trillion won ($1 billion), according to a Korea Economic Daily report Thursday. No comment was immediately available from Vogo or Anbang.

The businessman described Schwarzman as “a good friend,” citing the Blackstone head’s involvement in financially supporting an institute at Beijing’s Tsinghua University that has also received money from Anbang. The Blackstone-owned Hilton Worldwide Holdings Inc. is selling the Waldorf to Anbang for $1.95 billion, a deal that received U.S. regulatory approval this month.

Anbang has also attracted attention for becoming the biggest shareholder of China Minsheng Bank Corp., whose president resigned after a media report that he was under investigation. The Beijing-based Anbang is planning an initial public offering that could raise about $2 billion, people familiar with the matter said in November.

The businessman’s talk at Harvard spanned topics from his wish for Anbang employees around the world to speak some Chinese — at least “ni hao,” the usual Chinese greeting — to his ambitions for the company to within a decade have its own firms on every continent, with listings in many nations. In pursuing deals, Anbang seeks to pay below book value for companies that generate a return on equity of more than 10 percent, Wu said, according to the transcript.

He contrasted the Waldorf purchase favorably with the cost of property in Beijing’s financial district.

Founded in 2004, Anbang’s early shareholders included state-owned enterprises SAIC Motor Corp. and China Petroleum & Chemical Corp., known as Sinopec. The company is one of China’s “largest insurance conglomerates,” with assets of more than 700 billion yuan ($112 billion) and in excess of 30,000 employees and 3,000 outlets, according to its website.

Liantong Leasing Group Co., owned by two Shanghai-based private equity firms, was among Anbang’s shareholders as of Feb. 28 last year, along with SAIC, China’s largest automaker, according to records on the Beijing Administration for Industry & Commmerce website.

Adding to interest in the company, Wu “has been known for his deep connection with the children of China’s revolutionary veterans and leaders,” the state-run China Daily reported Feb. 3. Chen Xiaolu, a son of revolutionary leader Chen Yi, describes himself as a consultant to Anbang, Caixin magazine reported in January. A spokeswoman for Anbang said she wasn’t available to comment on the China Daily report and calls to the company’s office weren’t answered.

Chen was an Anbang board member as of Sept. 25 last year, according to records on the Beijing industry administration website.

Anbang’s 35 percent stake makes it the biggest shareholder in Chengdu Rural Commercial Bank Co., a lender in Sichuan province which had 429 billion yuan of assets at the end of 2013, according to its annual report. Anbang paid 5.6 billion yuan for the holding in 2011, consolidating the bank into its financial statements at a time when its own assets were a fraction of the lender’s, according to Caijing magazine.

In his comments at Harvard, Wu said the bank’s bad-debt ratio had fallen to 0.85 percent from 18 percent when Anbang bought in, and the lender consistently reported a return on equity of more than 20 percent. 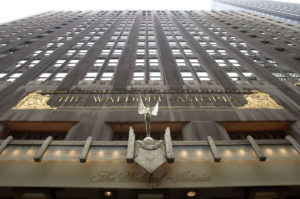 China’s banks are getting risky