Policy risk in the Chinese stock markets has heightened in recent months as evidenced by China’s widening regulatory crackdown on several over-heated sectors ranging from already closely monitored data-heavy & consumer-facing internet business segments to newly tightened private education & property sectors. A barrage of regulatory scrutiny and radical policy changes has frightened investors and triggered a series of panic sell-offs. Stocks trading in both the mainland and Hong Kong exchanges have slumped significantly, the most since May 2020. It is probable that such policy intervention by Beijing will continue and expand into the nation’s different industries. The trend of increasingly tightened regulatory monitoring over stock market reflects the goal of Beijing to safeguard the socioeconomic stability, rationalize market risk, in order to serve the interests of the ordinary people instead rather than investors, with the ultimate goal to narrow exacerbated inequality. These market crackdowns helps to rectify the over-optimistic valuation of public companies made up by manic markets. 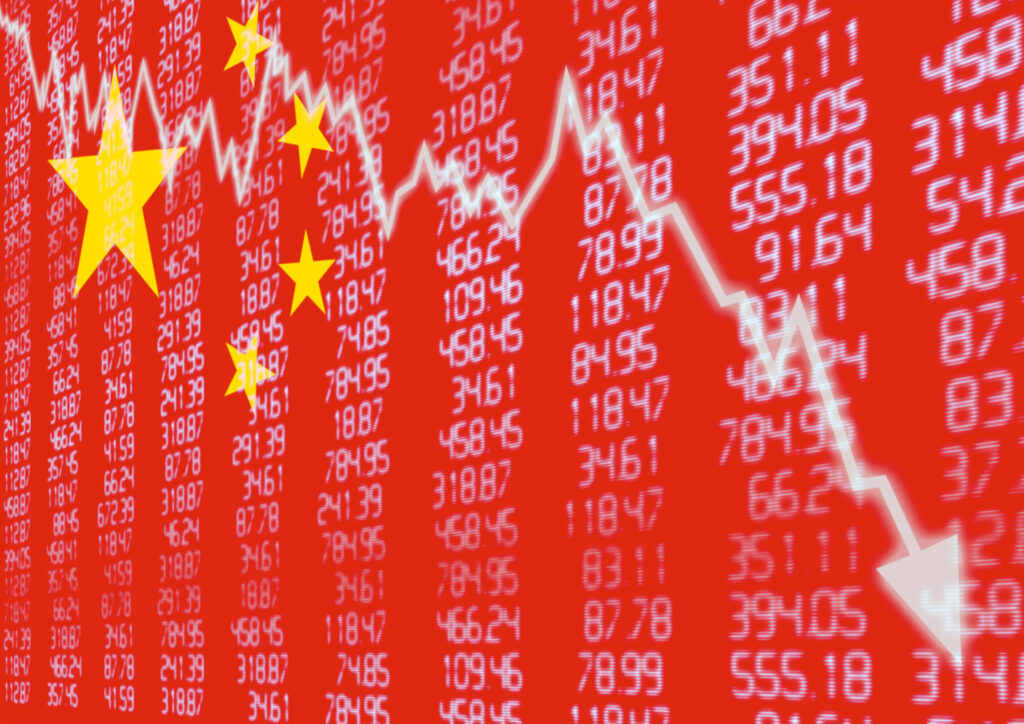 Stay tuned with policy directions of Beijing
Investor should adjust strategies based upon China’s continued policy tightening over designated sectors where Beijing considers socioeconomic issues. The Investment community is must conduct more intensive analysis of the Chinese government policies. In the near future, Chinese stock markets should expect volatility due to regulatory changes launched by the Chinese government. It is strategically advantageous to be well-versed with policy directions and their subsequent impact on industry sectors. Chinese State media and regular official announcements provide some policy clues. To minimize risk from policy uncertainties, investors should invest in line with China’s strategic goals. Policy-induced crackdowns triggers shifting investment focus to nation’s industries which are temporarily unaffected by policy directions of antitrust and data-related scrutiny.

Semiconductor sector
China has enormous demand for domestic chips because of the necessity for self-sufficiency to counter U.S. restrictions on imports and economic sanctions over Chinese technology companies. Such self-sufficiency prioritization sought by Beijing officials strengthens national chip makers and manufacturers of new materials. The Recent crackdowns did not seem to impact stocks of semiconductor producers. According to Bloomberg, an ETF named Guotai CES Semi-conductor Industry ETF which is tracking semiconductor stock in China has surged over 50% from May this year (Chart 1). On 27 July, Semiconductor Manufacturing International Corp. has surged by 13% in Shanghai Stock Exchange despite steep price declines in the Hong Kong’s Hang Seng Index on 26 July. The Semiconductor sector represents a new priority worthy of investment consideration amidst current regulatory crackdown. 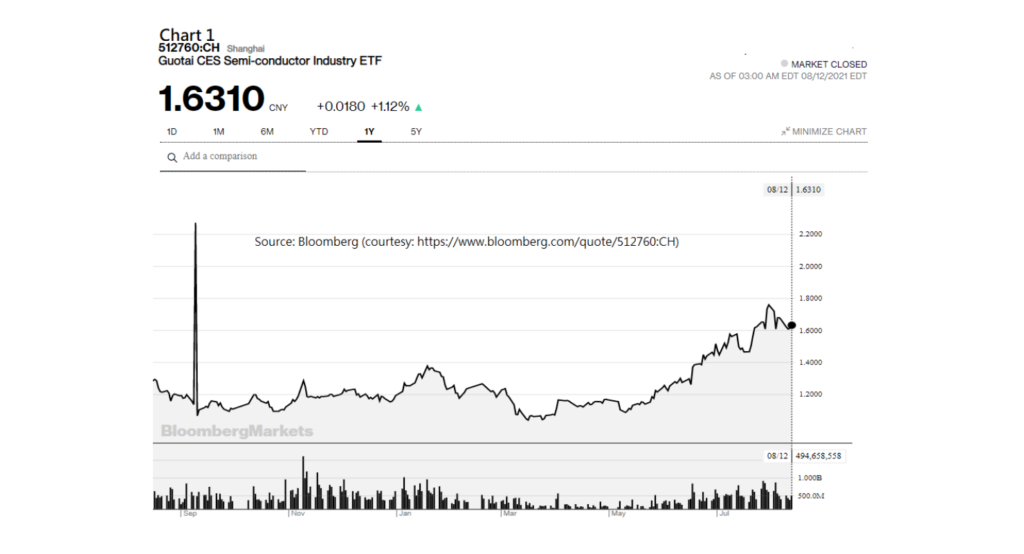 Green Energy sector
China has pledged to be carbon neutral by 2060, meaning it should reach zero net carbon emissions by 2060. A series of related policies from Beijing triggered the uptrend of renewable energy sector ranging from solar and wind farms to electric car manufacturers and related lithium & rare earths producers. According to Bloomberg, three green energy firms have driven the over 50% year-to-date increase of ChiNext and over half of top ten constituent stocks of the CSI 300 Index engage in carbon neutral businesses. This sector represents a new priority for investors who still value China’s economic prospects & sustainability.

Military sector
This sector aligns with strategic goals of Beijing. According to the analysis by Huaxi Securities, companies in the sectors of aerospace materials & parts and information technology and intelligence in national defense will probably be immune from price slumps arisen from continuing regulatory tightening. They benefit from China’s rising national military spending. An ETF named GF CSI National Defense Industry Index ETF which is tracking military sector has surged by over 20% from the May trough (Chart 2). This sector does not violate national security direction of China government and deserves of investment consideration. 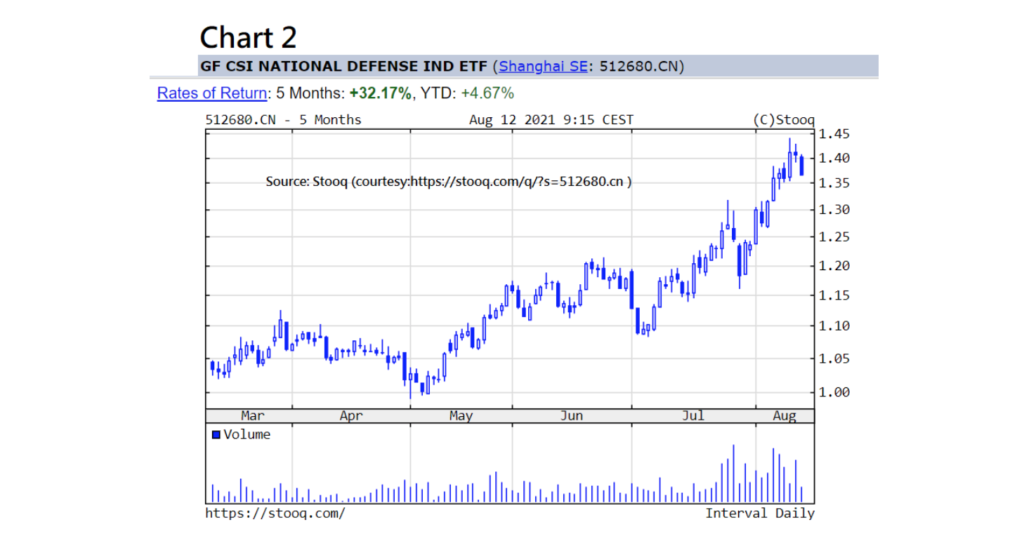